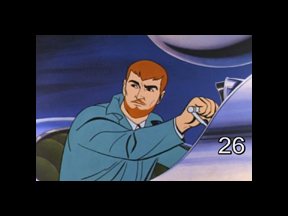 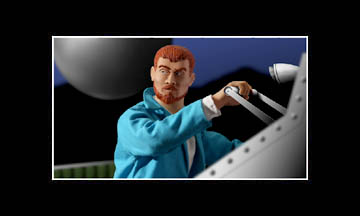 NOTE: After posting this clip, I decided that my previous version of Dr. Quest missed the mark. I had strayed too far from the original "look" by trying to incoporate elements of Walter Pidgeon ala Forbidden Planet.  What follows is the before and after correction saga.

Okay, cut number 26 is quick but involved. It's a lead in to cut 27 of the ParaPower Ray. This required the sculpting of Dr. Quest. 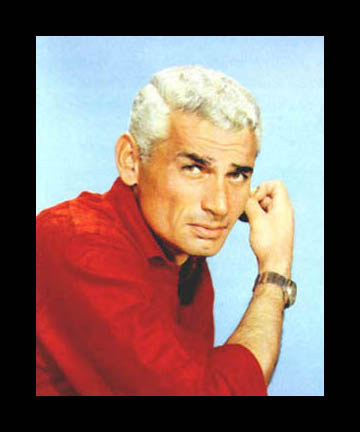 Now, just as Race was based on Jeff Chandler,

I always felt that Dr. Quest was very kin to Walter Pidgeon, ala "Forbidden Planet".

In an ideal world, a Jonny Quest movie would have been made with Jeff Chandler as Race, Walter Pidgeon as Dr. Quest (though Richard Basehart would do in a pinch),  a young Kurt Russell as Jonny and, of course, Sabu as Hadji. Yes, yes. I know. They come from different decades. Don't send me email.

Anyway, I decided to sort of combine the look of the original Dr. Quest design with the older, wiser look of Morpheus (Pidgeon). 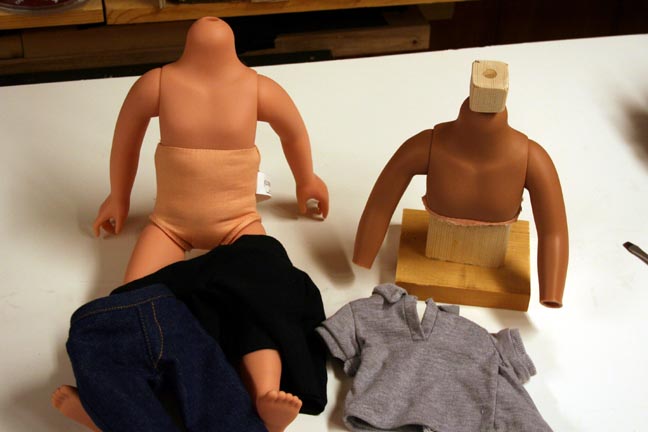 To start, I purchased a few dolls with larger, convenient body sizes that would make sculpting easier.  These dolls also had some ready-made clothing such as a pull over knit shirt for Dr. Quest and a pair of blue jeans for Jonny. The dolls were modified and mounted on a wooden support to make handling easier. 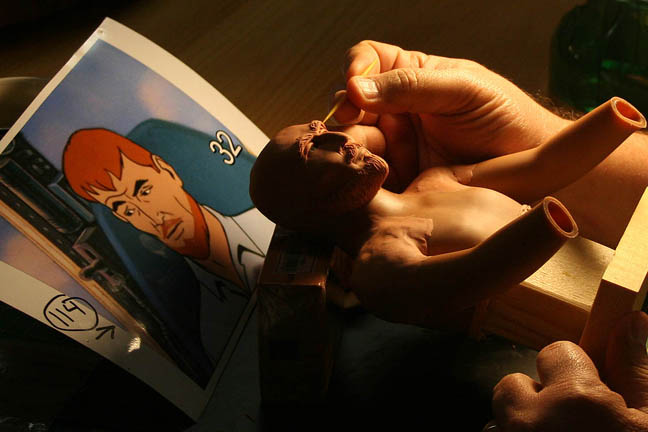 Even at this larger size, sculpting was a bee-otch and I had to resort to all kinds of tiny tools, including toothpicks.
(click on photo for larger view) 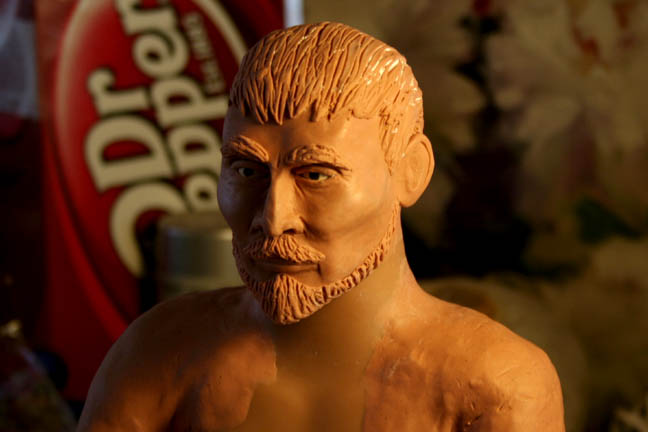 Here's the original finished sculpture unpainted. After posting this, I had mucho emails complaining about the more brutish look. Particularly offensive were the bushy eyebrows, which I had purposely employed because I felt the black, drawn-on eyebrows of the cartoon made him look like a drag queen. I mean, they worked as a cartoon but, in real life, black eyebrows just looked odd on a man with flaming red hair. 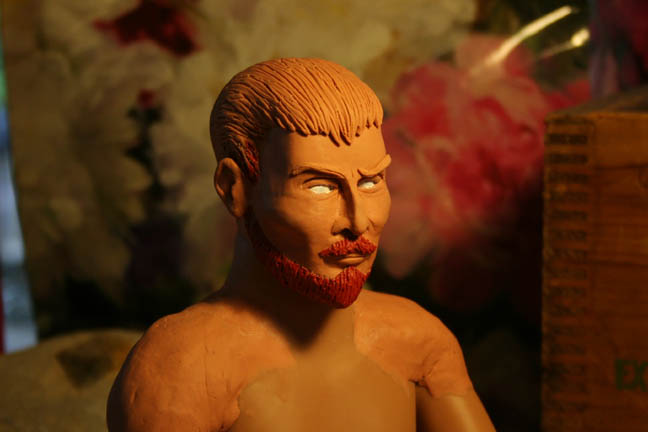 Upon reflection, I decided to go back and make some mods to the sculpt. In this redux, I have raised his forehead and added some height to his hair. This also made his face look longer and thinner. The dreaded bushy eyebrows are gone and replaced with thin, expressive eyebrows as in the original cartoon. 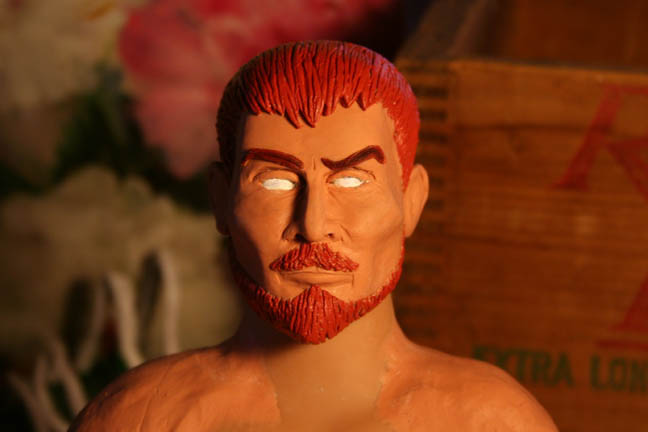 And this is the final with a coat of red oxide on the hair. While this is an oil based modeling clay, I found that un-diluted acrylic will stick to it (at least long enough to get the shot!). As a compromise, I darkened the eyebrows to a deep red but not completely black. I think this works. 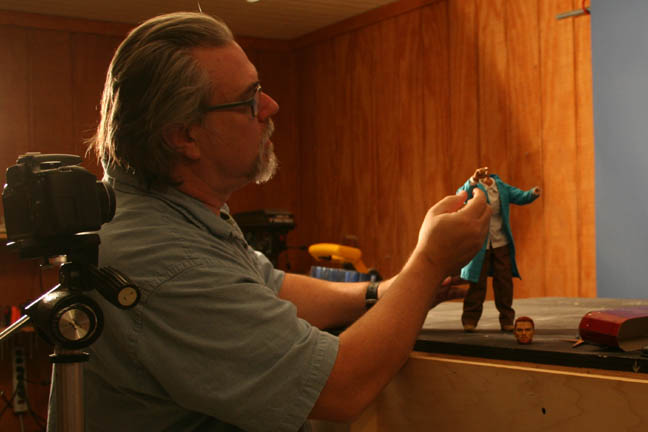 Here I am setting up a smaller figure in the required pose. 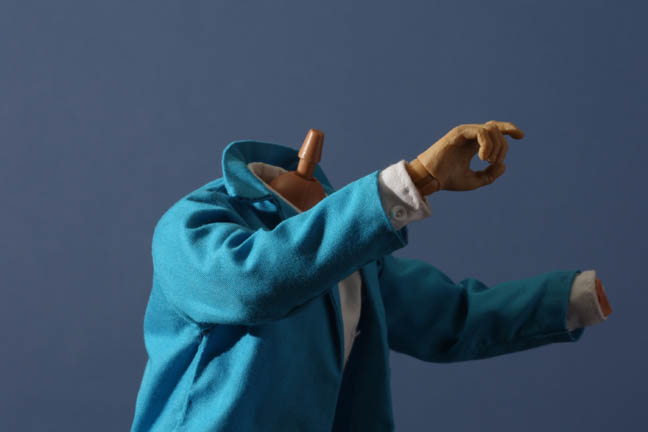 This body is at a smaller scale and was left over from cut 27.  However,  since the body doesn't move, I saw no reason to have a new, larger lab coat and white shirt sewn when I could just comp the large head onto the smaller body in Photoshop. 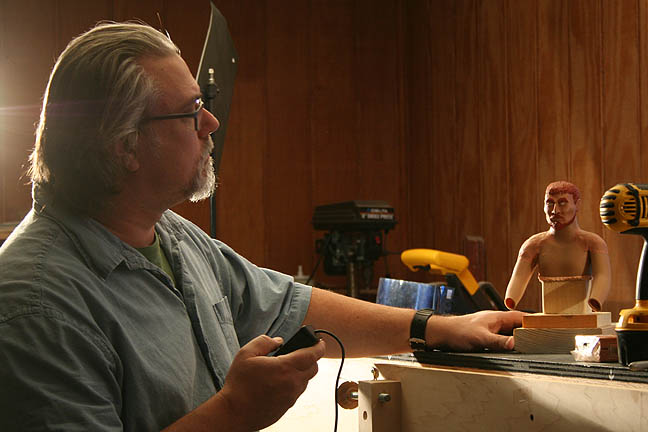 Since the head needed to turn, I put the bust on a rotating block with the neck dead-center on the axis and animated it turning toward the camera in 13 increments. The lower body was then removed in Photoshop during compositing with the smaller scale body.

Now,  my original inspiration for this entire project was based on the idea that, if Jonny Quest had been on the air long enough, then there would have eventually been a really cool line of action figures based on the various characters from the show and those figures would be what I would use for my stop motion project. But JQ went bust after only one season and the action figures never materialized. But the "Marx Action Figure" look is what I have been Jonesing for all along. So while the sculpture looks interesting, I need to smooth out the texture to get that plastic-skin-sheen common to all action figures from the 60's. 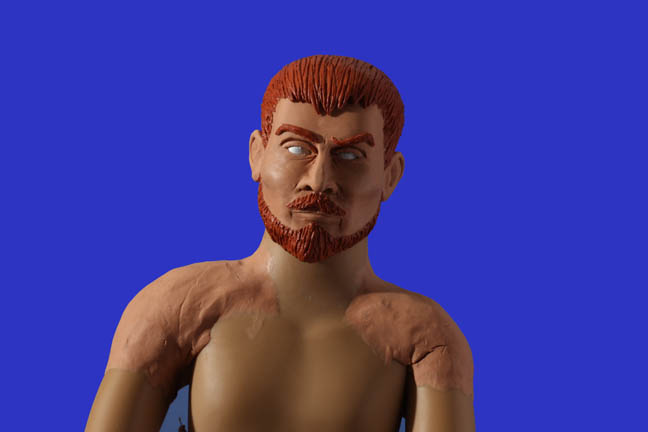 Here is the original head as photographed. 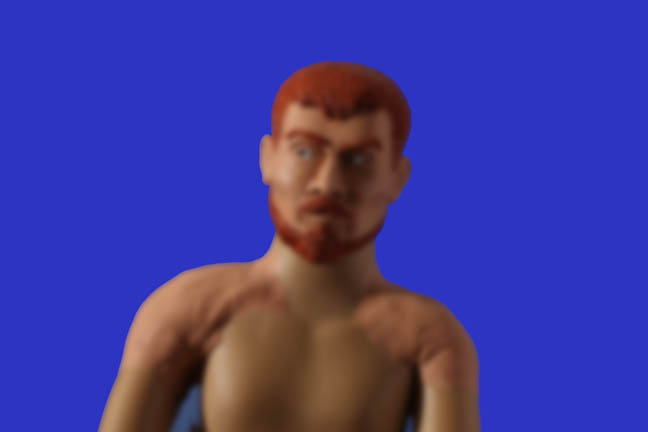 I copy that to an upper layer in Photoshop then take the lower layer and add a gausian blur to soften the texture of the clay. 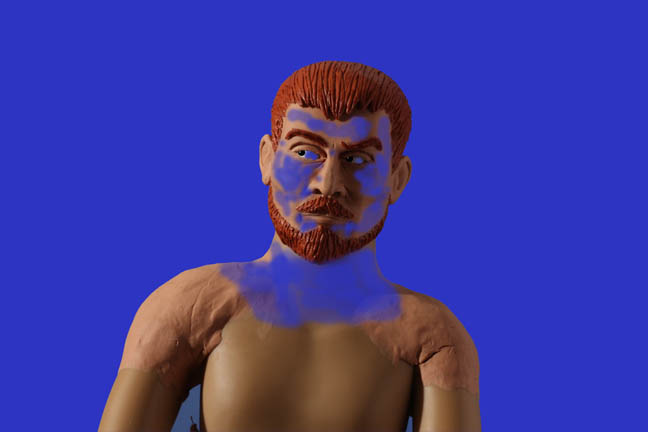 I then use a soft-edge erase tool to selectively erase parts of the upper layer to reveal the blurred version below. 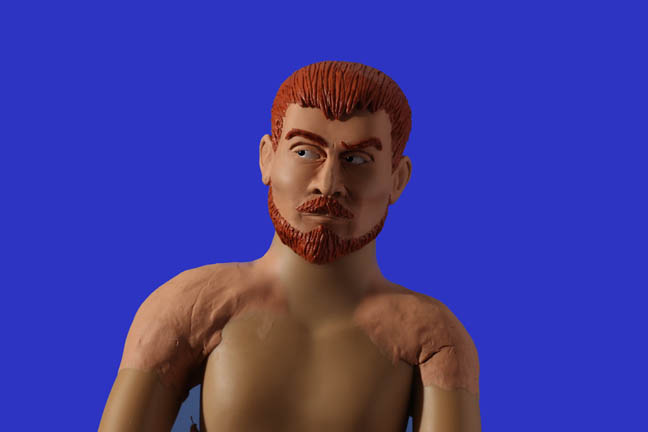 When the upper, sharp layer and the lower, blurred layer are combined, you end up with smooth, plastic-like skin!

The eyes were added after the fact in Photoshop, along with blinking eyelids and a multi-plane push in to add depth.


Here are the various elements, in no particular order: 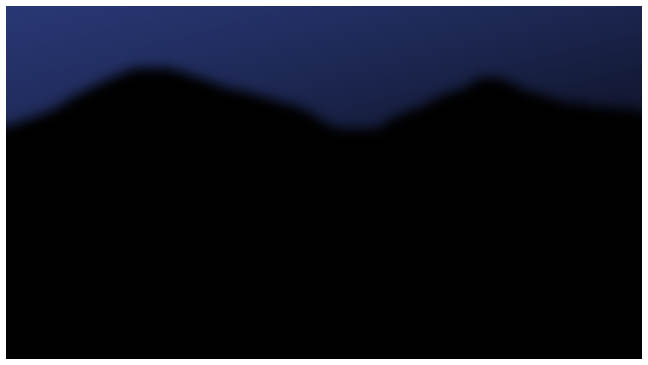 This is the background, which is purposely racked out of focus. 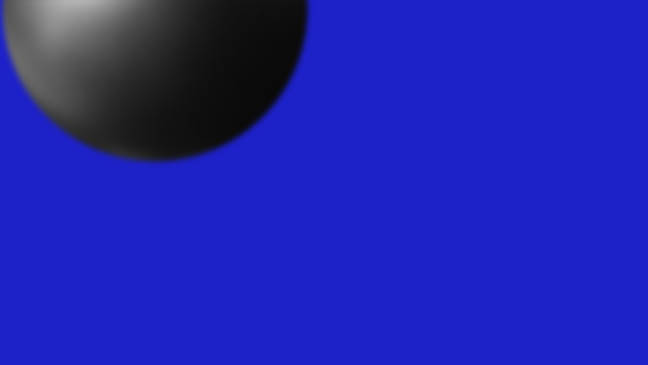 The large, over head sphere. 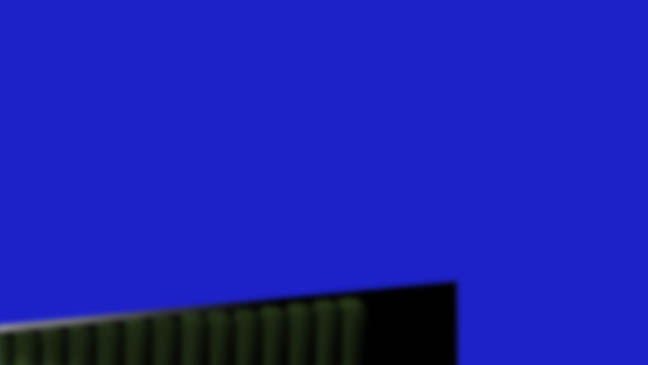 The back-rest of the seat. 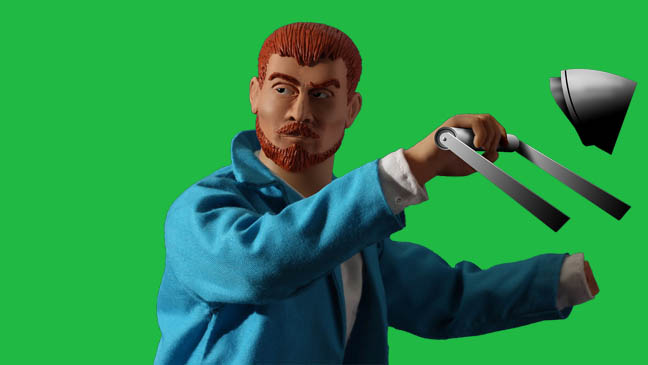 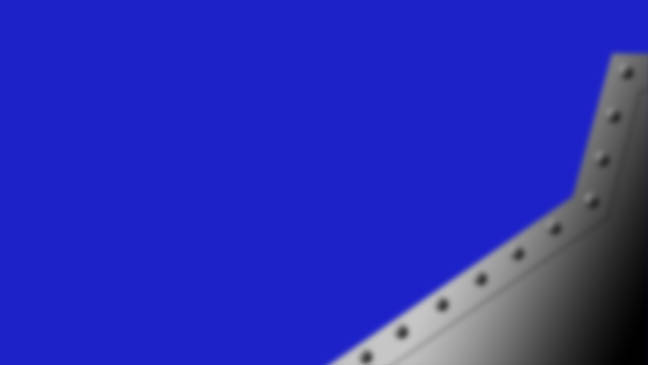 And, finally, the console of the ParaPower Ray gun in the foreground. 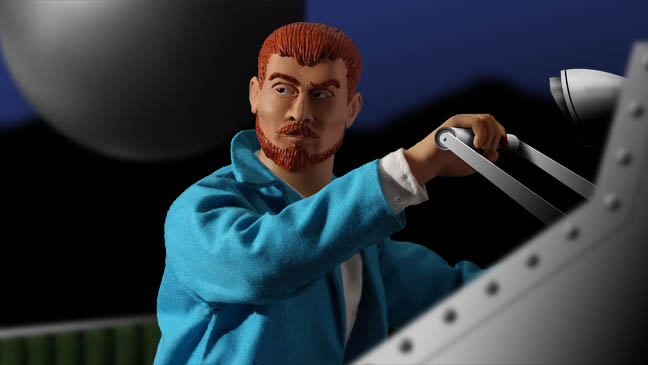 And this is what they look like all together!
Click on the image for a larger view!