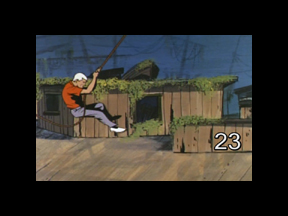 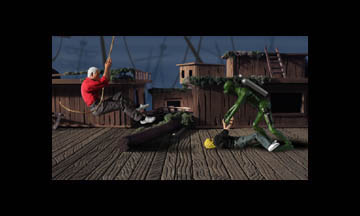 This is scene #23, where Race swings in and rescues Jonny from the clutches of the evil Lizardman. 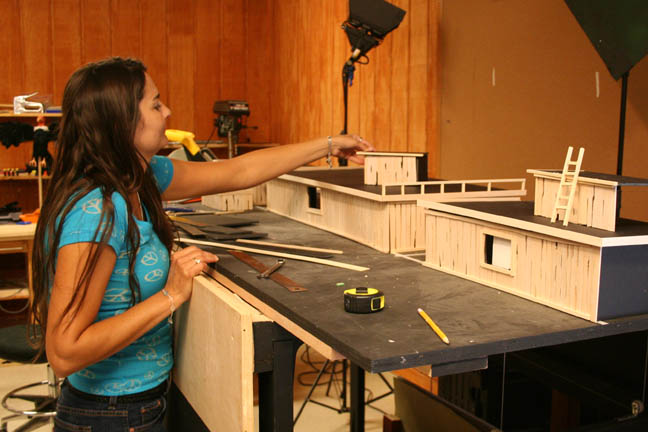 Here Brandi places unfinished cabins on the stage to get an idea of position relative to the frame. Because the shot calls for a long, rapid dolly across 47 frames, the length of the set and relative start and stop positions are important. 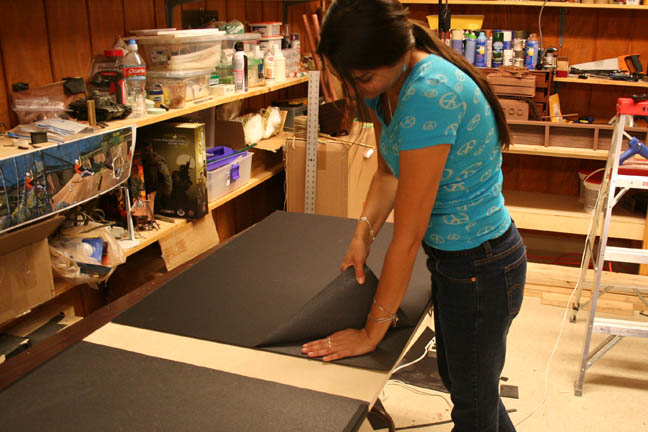 The deck of the ship is made from black foam core with one of the cardboard layers peeled off. The remaining foam can then be scored to create the planking necessary for the nearly 8 foot long set. 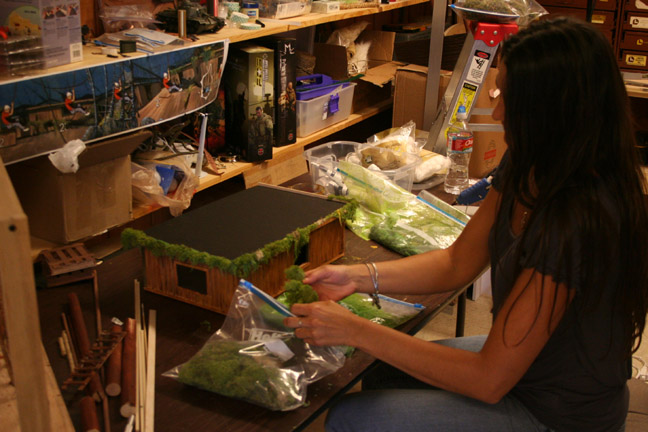 The various ships'cabins and decking were made from balsa wood and foam core scored to look like wood grain. 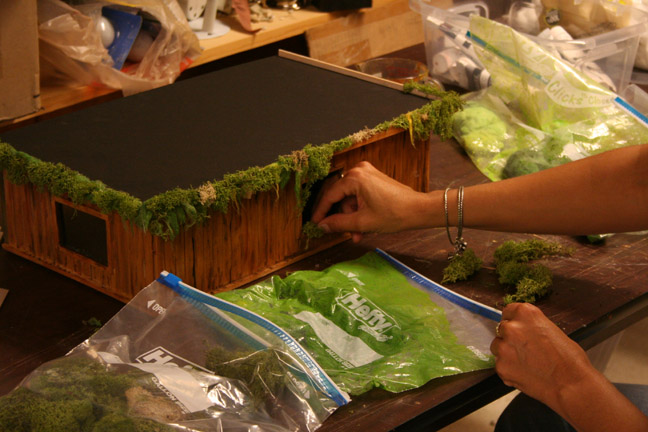 Brandi uses a combination of lichen as well as cotton saturated with green latex paint to simulate seaweed. 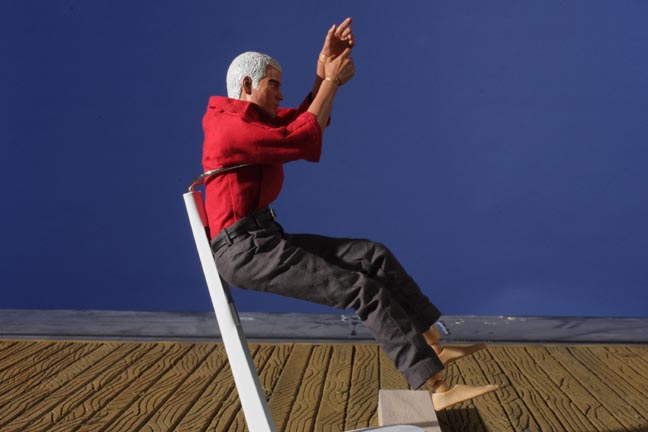 Posing Race was problematic because the drawing had him in a very dynamic position, which the action figure we used would not do. So I decided to just shoot him as a still frame and then manipulate him in Photoshop to get the desired position. 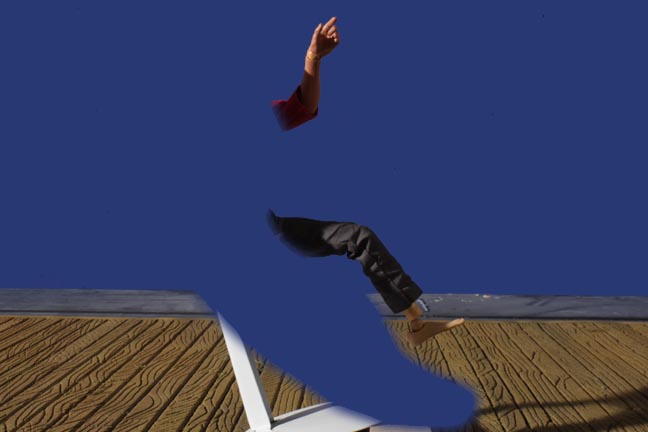 But because he would be moving across the screen slightly, the lack of paralax on his arms and legs would make him look like an obvious, flat paper doll. So I decided to shoot his left arm and left leg separately. I could then move them across the screen at slightly different rates, which would make his left arm and leg recede from view as he traveled, just as your eye would expect it to if he had been animated and shot as a model. 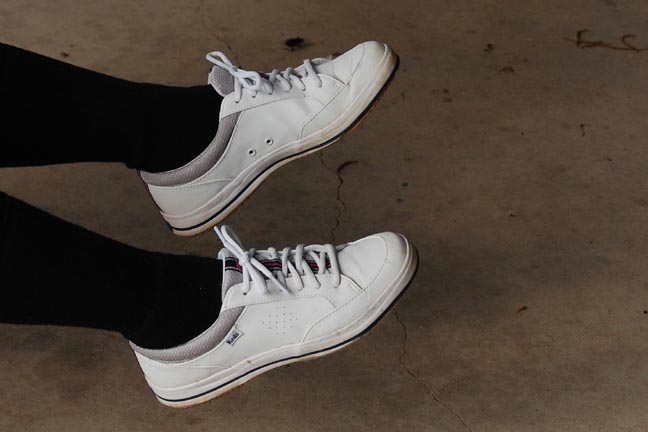 We could not find a suitable pair of white sneakers for Race. But since he was going to be a Photoshop cut out, I just had someone put on a pair of ordinary tennis shoes and then composited them onto Race's feet. 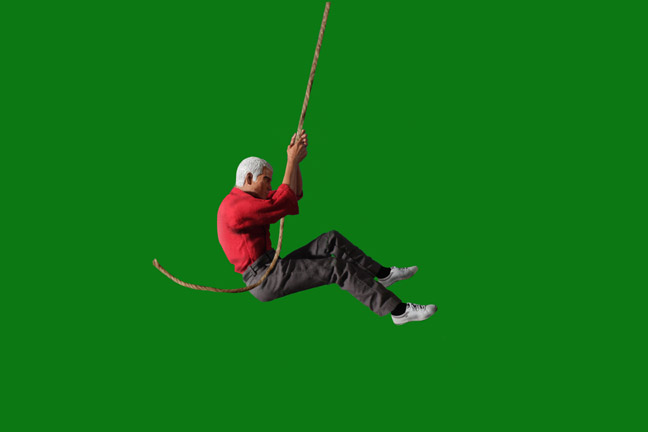 Once the arms and legs were animated together, I pre-comped them onto a green backing for compositing purposes later. 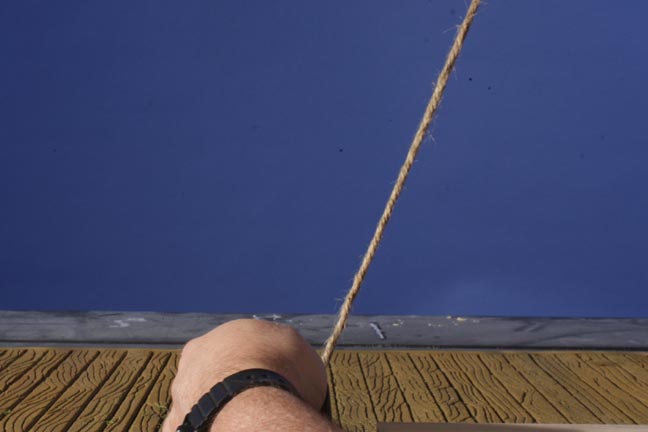 The rope that Race hangs from is just some cheap twine found at the hardware store. 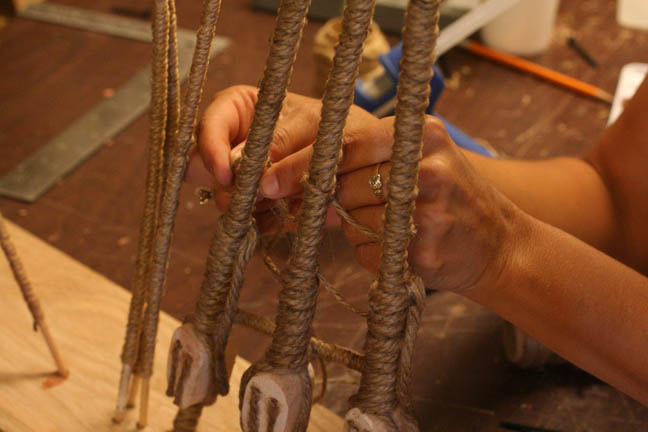 This same twine was used by Brandi to make all the rigging for the ships. 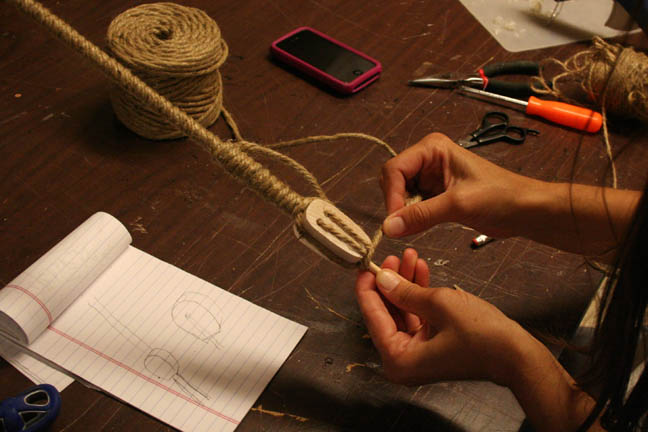 The various "ropes" were actually twine wrapped around wooden dowels. The dowels prevent the ropes from vibrating during animation. 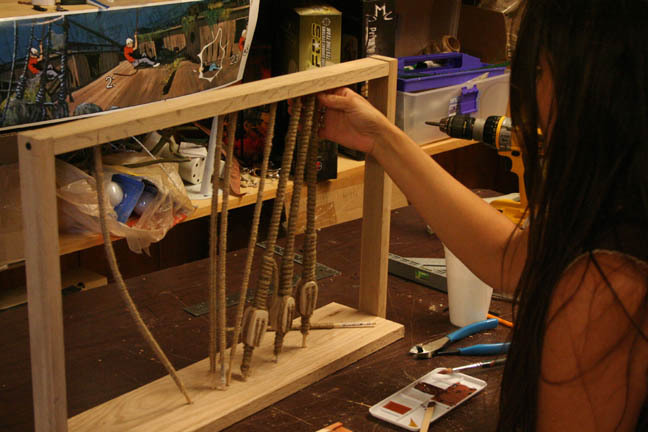 The dowel/rope segments were then attached to a frame. 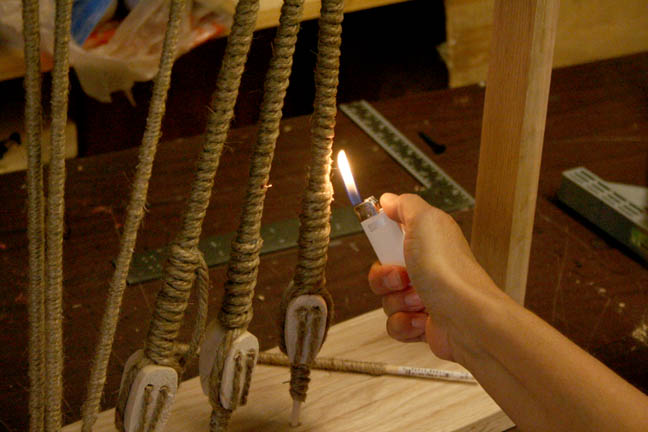 No we're not burning down the house. Rather, Brandi is burning off the various stray fibers that stick out of the ropes. 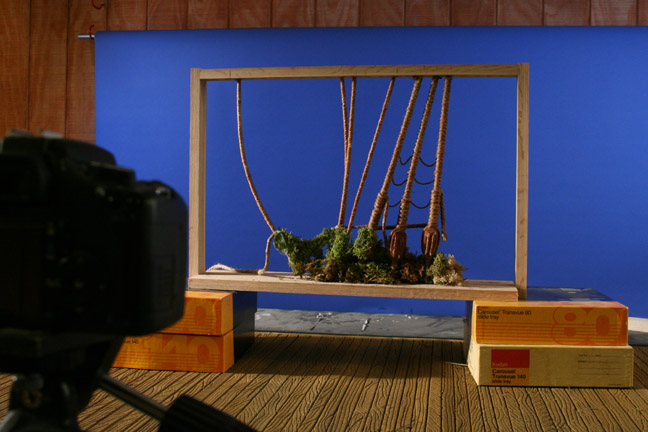 Here is a foreground element shot separately as a blue screen component. This allowed Race to pass behind this rigging as he swung across the deck of the ship. 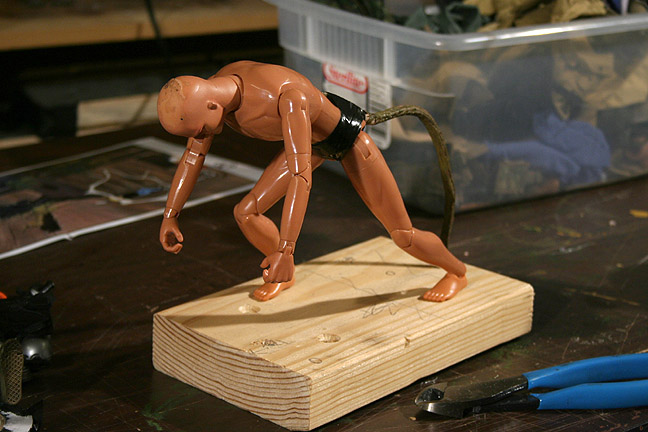 Making the frogman was fun. As he only appears in a few frames, I decided to just do a quick and dirty build. I started with a standard action figure and attached a piece of flexible wire to his butt. This would allow me to animate him airborne as Race kicks him in the stomach. 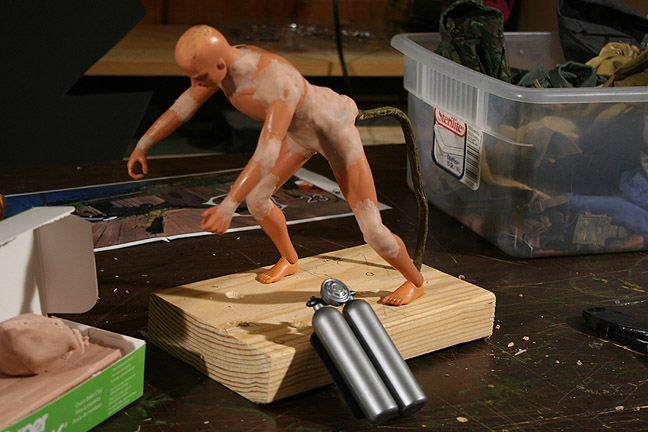 I then covered all the joints with Super Sculpey. I didn't bother to let it dry because I wanted it flexible. 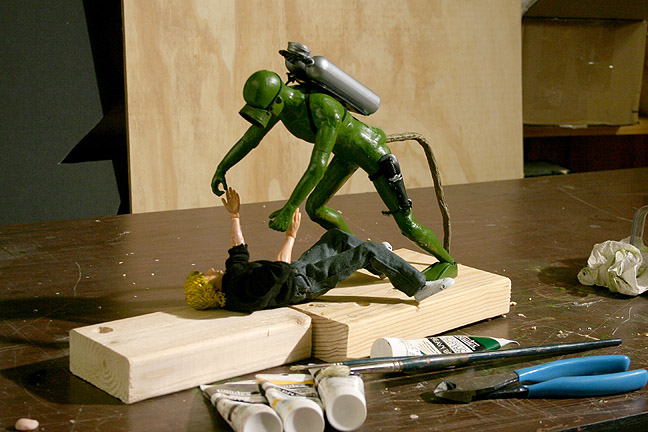 A quick coat of paint and some scuba gear courtesy of GI Joe and he's ready!
The figure of Jonny is another, smaller scale action figure. He doesn't look like Jonny but he faces away from the camera, which is a good thing as this particular figure has a 5 o'clock shadow. ;) 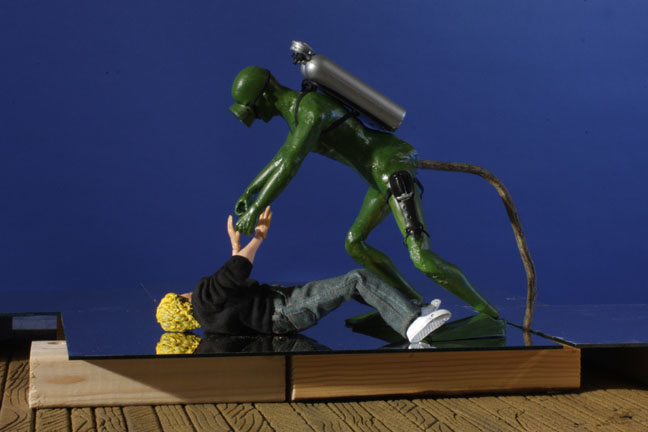 I placed both figures on mirrors so that the blue screen would be reflected and surround their bodies as much as possible. This reduced the amount of roto work necessary to cut them out by probably 90% as only the bottom edges needed to be addressed. 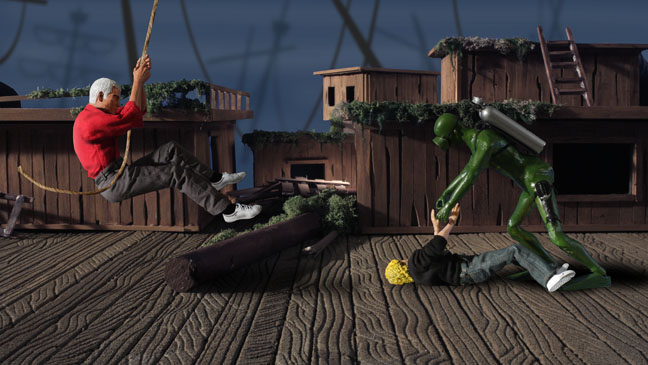 And here's the final composite! Click on the picture to see a larger version. 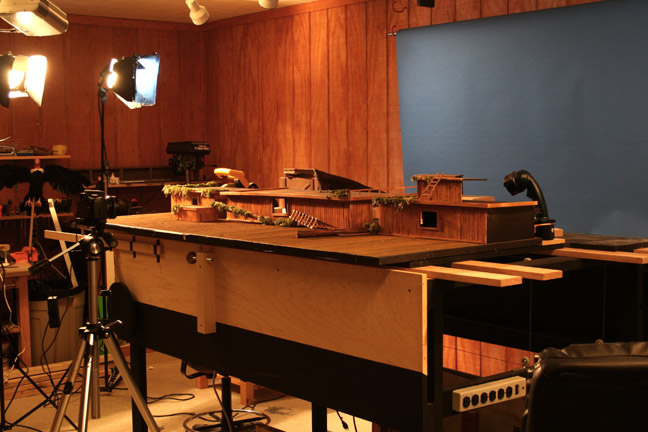 This is the set up on the day of the shoot. For a behind the scenes of me explaining the multi-plane table, click HERE!