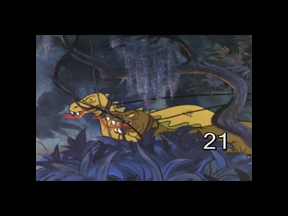 This is a shot that I've been looking forward to for a while, which is a pair of big lizards rumbling through the jungle.
As is common throughout the Jonny Quest opening titles, there are two versions of this scene. The titles show some funky, long neck dragons with fins while the actual episode showed more traditional Kimodo dragon type lizards; accurate, perhaps, but a bit boring. I decided to sort of combine the two and go with a design that is shaped more like a Kimido dragon but with fins. Due to my valued friendship and admiration for master animator Jim Danforth, I modeled my big lizards more along the lines of the Mother Dinosaur in "When Dinosaurs Ruled the Earth".
My lizards are more cartoony by design, and I am certainly no Jim Danforth, but I'm pretty happy with the results.

I used clay to keep the "look" of the lizards consistant with all the other critters in this saga. 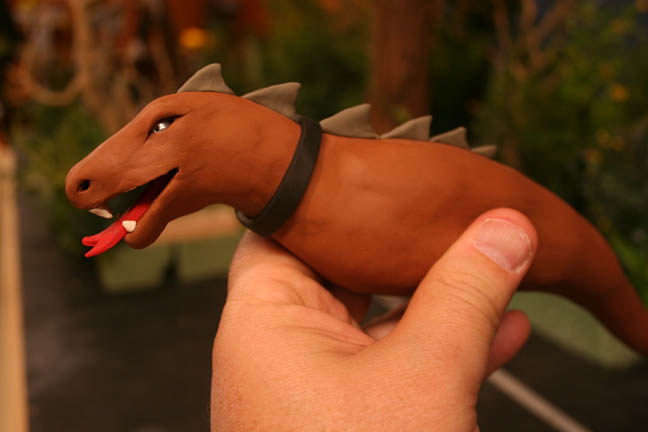 Here's the lizard without legs! As he will only be seen from one side, he also has only one eye! 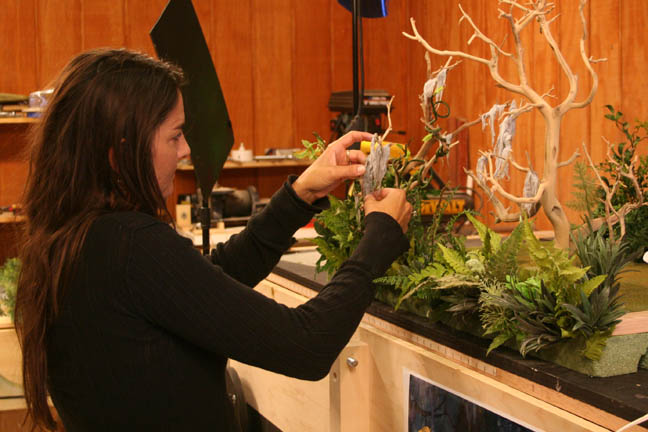 While I worked on the dragon, Brandi got busy building the jungle set, which needed to be in several layers so that each layer could be separated for the sake of easy compositing. This is because the dragon was sculpted at a smaller scale than the set. The smaller scale on the dragon was necessary since it had no armature and I wanted to keep the weight down. 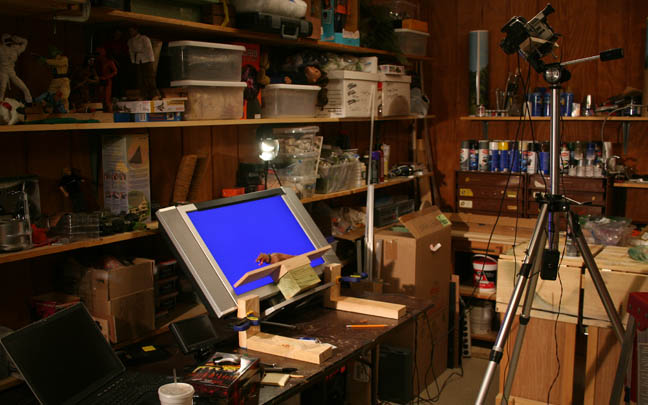 As with the Black Panther in Cut 4, I used a tilted video monitor to shoot the dragon. (Adds a whole new meaning to the term "monitor lizard".)  Anyway, the monitor will output a perfect blue for keying when there is nothing plugged into the video input. 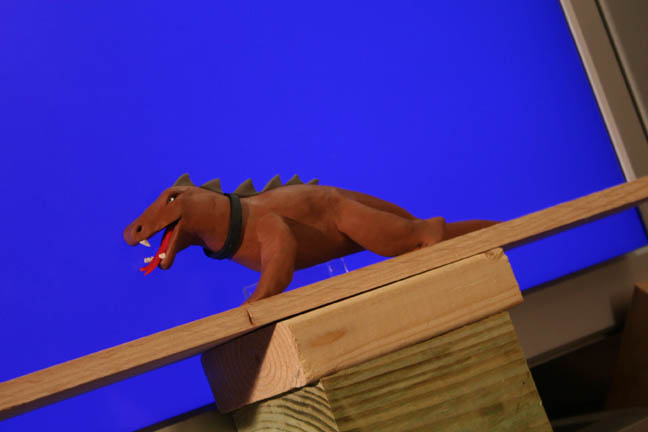 By leaning the dragon against the monitor, I can easily animate it without an internal armature as the dragon will stick to the glass ( a clear video cassette case under his belly also helped keep him up). You will note that he/she/it has only legs on the foreground side of its body. I reasoned that, since the dragon is seen only in profile, I could simply layer two copies of the animation but use the foregound legs at the rear -  only 180 degrees out of phase. This saved quite a bit of time in the animation process, which was only a 20 frame walk cycle. The original titles had a 32 frame walk cycle but that seemed a bit slow to me. 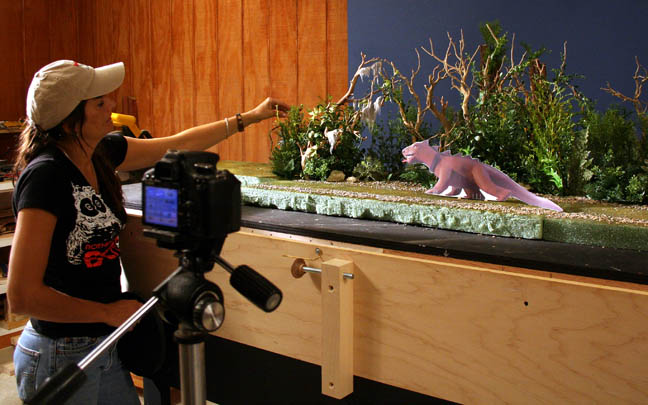 Once the animation cycle was completed, I then enlarged and printed a frame of the dragon which Brandi mounted on cardboard. The photo had small increments superimposed on its feet that matched the gate of the animation. This photo cutout allowed me to do two things easily: One was to visualize where the lizard would be in relation to the set and, two, the increments on its feet told me exactly how much to move the set for each frame. I would then take a reference photo of the jungle with the cutout in place before removing it for shooting the moving background frame by frame. In post, I could then use the reference photo to size and place the existing animation cycle, knowing that the rate of movement on the jungle background would match the movement of the feet exactly. Without this reference photo of the cutout in place on the set, I would have to shoot the background over and over in trial and error fashion until I got it right. 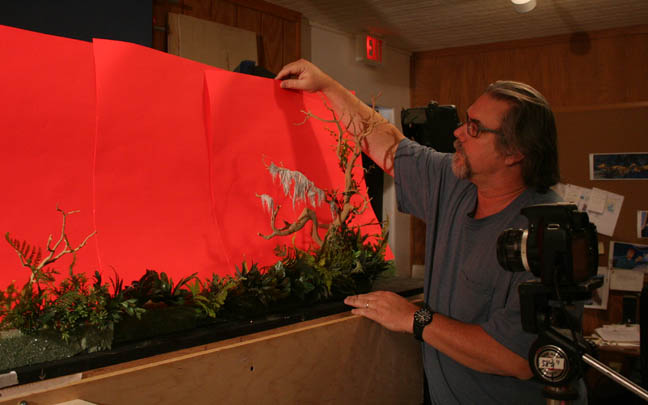 The foreground foilage was shot separately. This was necessary since the dragons would be composited and "sandwiched" in between the foreground and background imagery. To keep from rotoscoping the plants and trees, I just put some flourescent orange poster board in place and that allowed me to create a hyper-accurate key for the foreground plants.

And here are the various components, in no particular order: 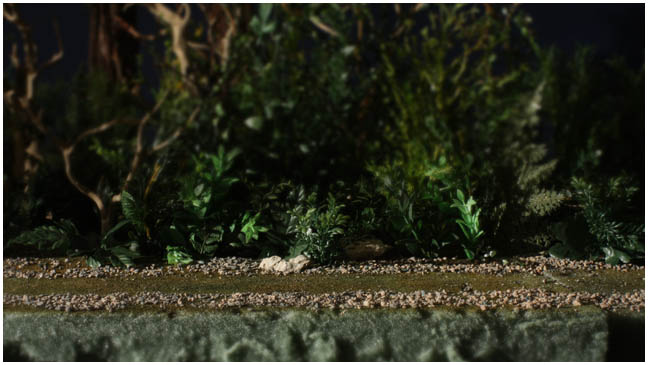 The background was softened in Photoshop with a slight gausian blur to mimick a shallow depth of field. 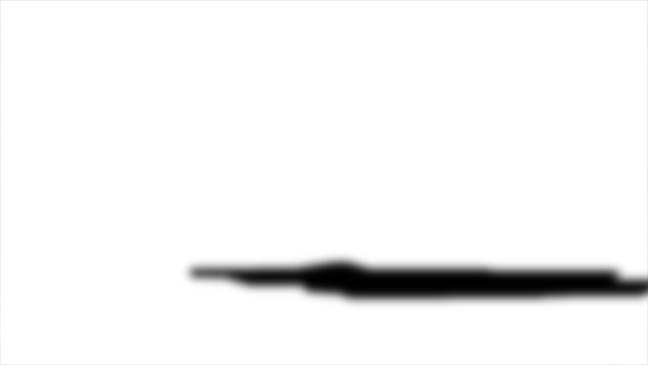 A shdow was created to tie the dragons to the ground. 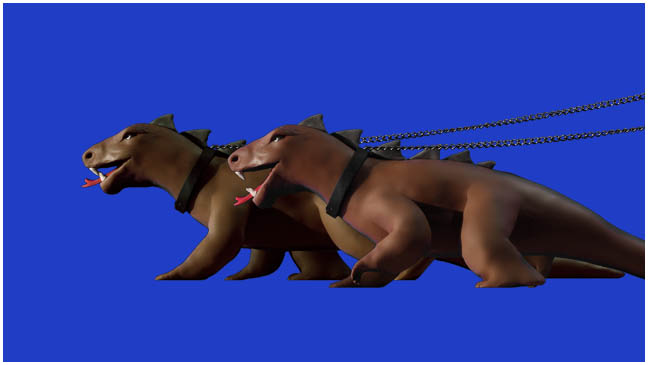 As you've no doubt figured out, I animated only one dragon and then changed the color slightly and reduced its size a bit for placement behind the front dragon. As noted previously, the dragon had only one set of legs. The background legs were just copies of the foreground legs, only started at frame 11 of the walk cycle instead of frame 1. I also darkened the background legs a bit as they would naturally be in shadow. A slight foreward movement was added in post with the foreground dragon moving forward slightly faster than the rear dragon. 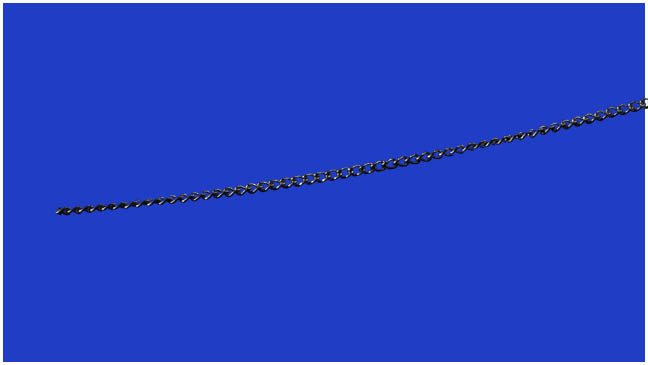 I used the chain from our dog's leash and tracked its movement against the collar of the dragon. 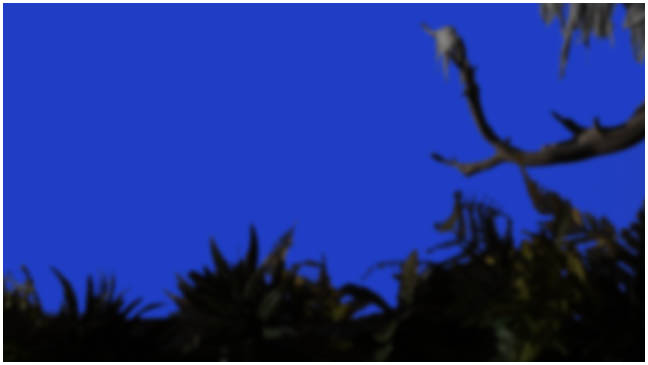 The foreground was isolated and racked out of focus in Photoshop. 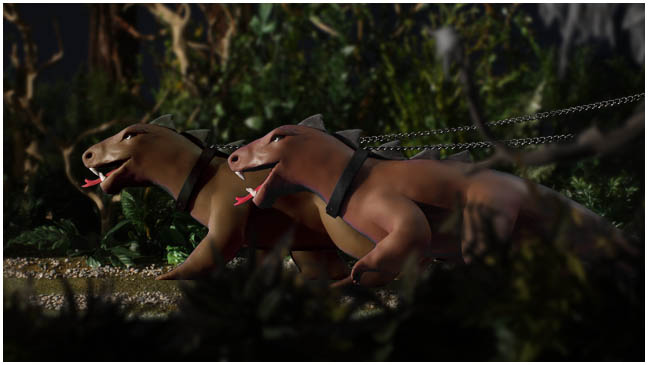 
The completed clip is at the top of the page!