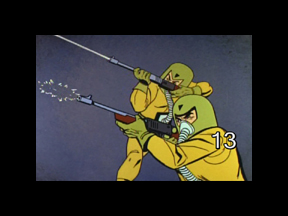 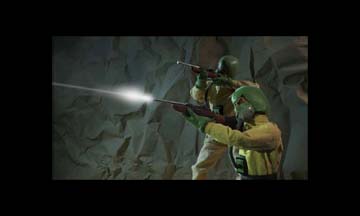 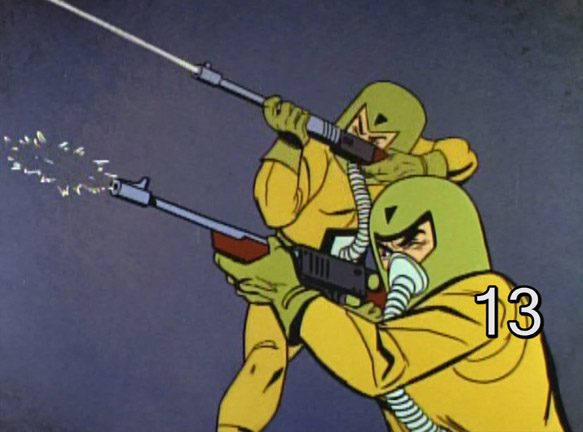 These guys have funky, avacado green helmets and gloves and weird, short rifles. Their helmets have some sort of Vader-esque breathing thingy that attaches to a panel on the belly of their baby-crap-green jump suits. Not being able to find actual jump suits, Brandi took some regular green fatigues and bleached them, which happily made them turn a less offensive light yellow. We then put the shirt and pants on backwards so that any buttons were in the back. With a wide, black belt, this gave us the impression of a one piece jump suit. 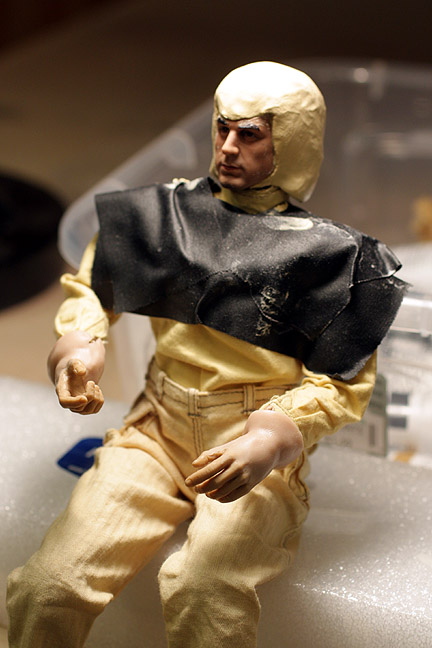 The helmet was problematic in that it had to cover the entire head and, in typical Escher fashion, the head needed to bend to one side in a way that would be impossible if the helmet really went down to the shoulders as it does in the drawing. So I made an executive decision to shorten the length of the helmet to leave room for head tilt. To make the helmet, I covered the head with wood putty in a rough shape and let it dry. I used Super Sculpey to simply add gauntlets to the existing hands. Interestingly, when the Super Sculpey is painted over with acrylic paint while the clay is still soft, the clay retains elasticity as no air can get to it! Very handy. 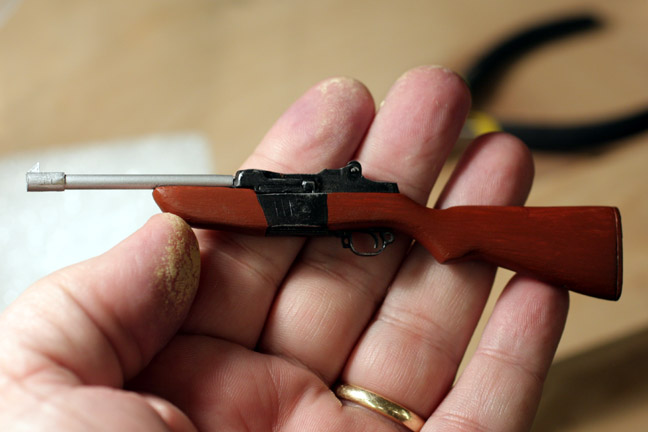 The gun had to be fabricated almost from scratch. I used an existing rifle and then shortened the stock on the barrel end, filled it with wood putty and then sanded the end to round and taper the stock. I created a totally new barrel out of plastic tubing from an ink pen. A coat of brown paint for the stock and silver paint for the barrel and the job is done. But the tiny scale was s real pain in the butt to work in. 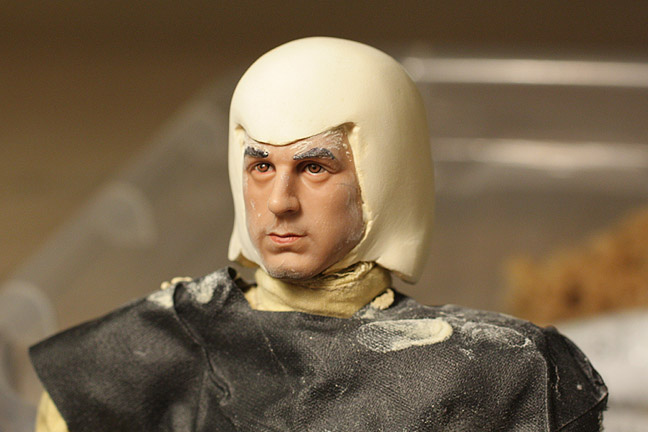 Here the helmet has been sanded smooth. I must say that this worked out much better than I had hoped. However, sculpting with wet wood putty is like trying to shape something out of melting butter. It is definately a learned art form. The black tape is to protect the clothing from drips and paint, etc. 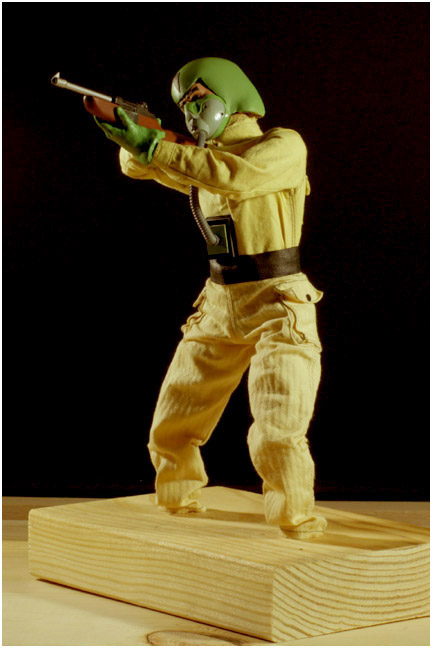 As this was a very unique build, I just created one green-helmet-dude and will shoot him in two different positions. His feet do not show so I just pulled them off and stuck his legs into a couple of holes in a block of wood. His face mask is a modified breathing mask from a jet fighter pilot helmet. I also painted some more angular eyebrows to make him look meaner and more like the drawing. 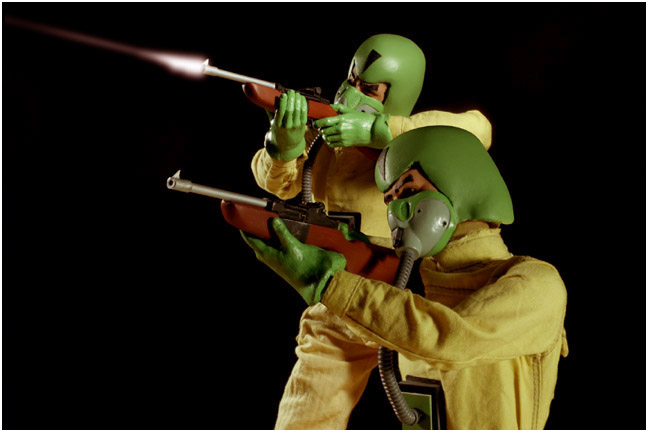 And here's a quick composite/lighting test below the original drawing for comparison.
The background of the cartoon was just nebulous blue. But I will be using a rock cave wall in the finished shot.

Set up the cave interior for scene 13. 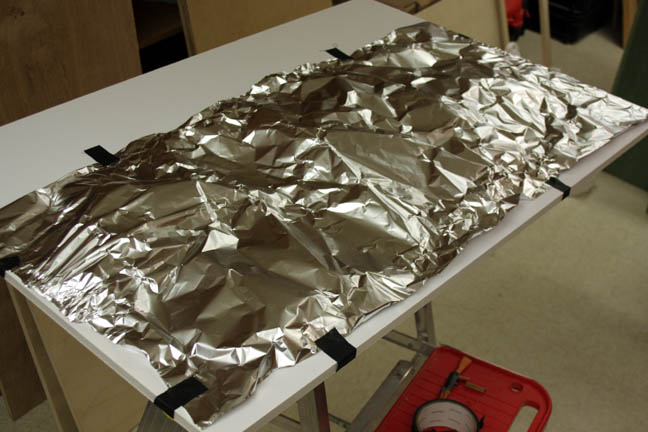 As the shot goes by in only about 30 frames, I felt there was no need to break out the plaster. Just tape some wrinkled foil to a piece of foam core board and give it a couple of coats of grey and tan spray paint. 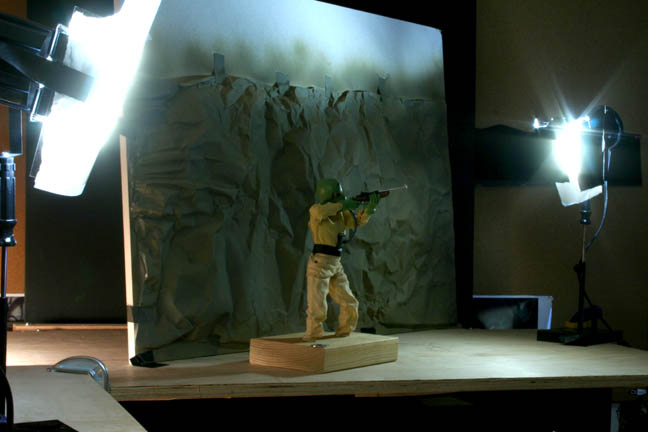 Here's the set up ready to shoot. You will notice that the green-helmet dude is facing the wrong way. This is because his hands are specifically molded to hold the gun a certain way. I guess everyone in his tiny world is right handed. Anyway, as the shot calls for two dudes and I only built one, I was going to have to composite the two together, anyway. So I just shot him facing to the right and then flipped it horizontally in Photoshop. I then reversed the lighting and faced the green-helmet dude the other direction for the second shot. I also decided to bring the light level down and use mainly rims instead of the brighter light that I had in the previous sample photo. I made this decision because there is a lot of gunfire that will illuminate their faces here and there. Making it a bit darker really accents the muzzle flashes.