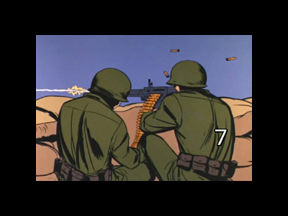 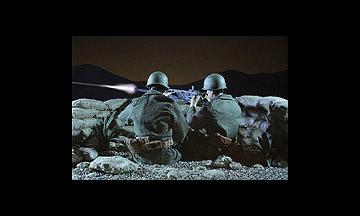 
Decided to start with the soldiers and machine gun shot, which is number "7" in the opening title sequence.
The original art work from the series looked like this. 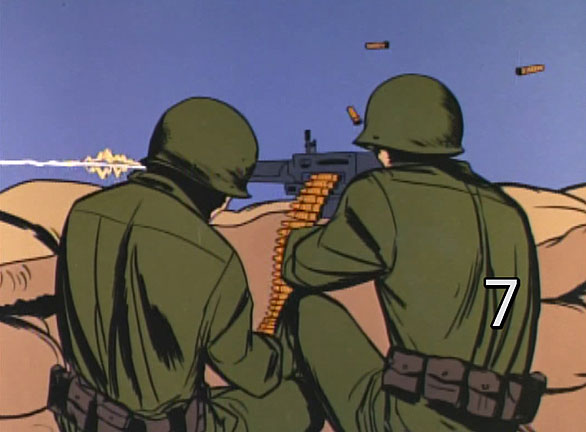 As you can see, the aspect ratio of the original is about 4:3, the same as normal television has been for the past half century. However, our plan is to produce this in HD, which has an aspect ratio of 16:9. This means having to "widen" the sets and change character placement a bit to make it work. 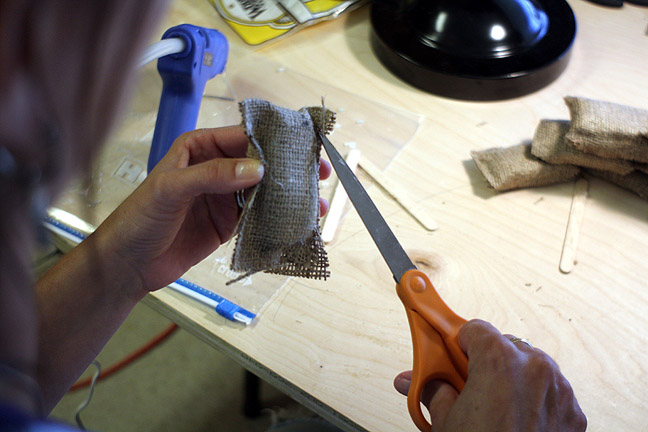 Here Brandi is making burlap sandbags. Technically, the weave of the sandbags is pretty heavy and not to scale at all. However, it just "seems" right and offers interesting texture. Since the shot will be on screen for about 2 seconds, I think it will work just great. Brandi came up with the great idea of using dense styrofoam rectangles as as a basis for the sandbag. She then wraps the burlap around the block of styrofoam and secures with hot melt glue on the off-camera side. After trimming, the internal styrofoam can be "bent" and squashed to create the appearance of weighty sand. 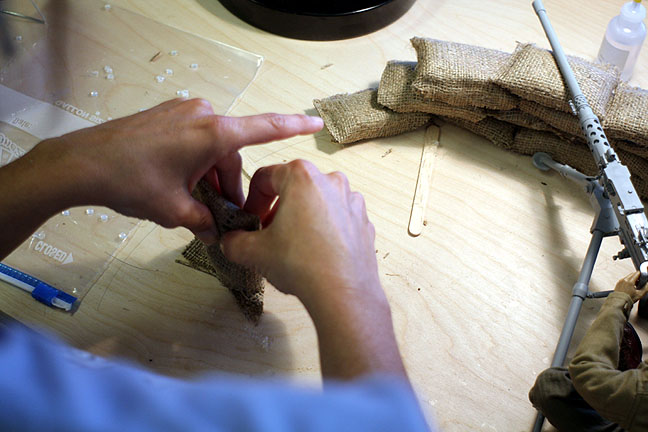 Note the unpainted model machine gun to the right. The original cartoon appeared to be using a smaller, 30 calibre machine gun. Because of the wider aspect ratio, I decided to use the larger 50 calibre. While the "heft" of the gun seemed right, the barrel was way too long, even for 16:9. Also, these field weapons were usually used in a lower position, while the artwork from the titles demanded the gun be at almost eye level. The spread of the legs on the model were problematic, as they interferred with the placement of the sitting itryman. So I had to cut the barrel, shorten the legs, and then add some height to the tripod head. The gun still isn't as high as in the drawing but seem natural enough. 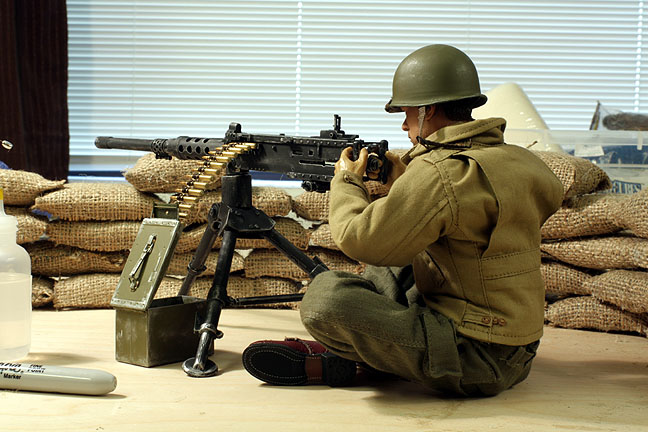 Here's the finished gun and ammo box. Some of the sandbags are visible in the background. The clothing is not correct as this appears to be an officers' jacket, etc. It will be changed for the final shot. Also, the helmet has been repainted since there were some sort of numbers on the back of it. All "metal" items like the helmet and machine gun and box were weathered with drybrushed silver on the edges and other areas of natural wear. 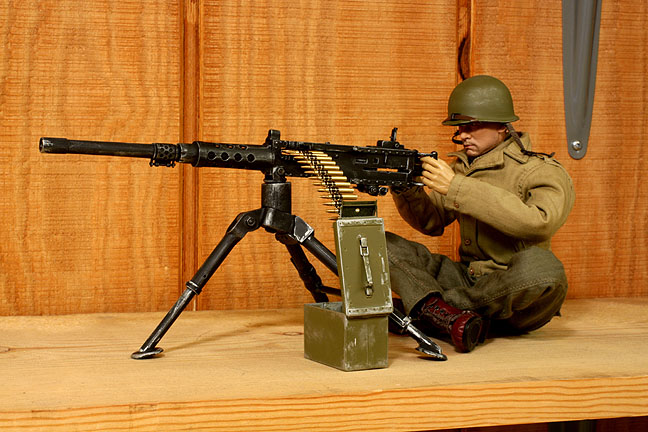 Another view of the finished gun and ammo box. The bullets are removable and will be animated moving appropriately through the gun mechanism. Airborne shells will be animated as a separate layer and composited into the shot. 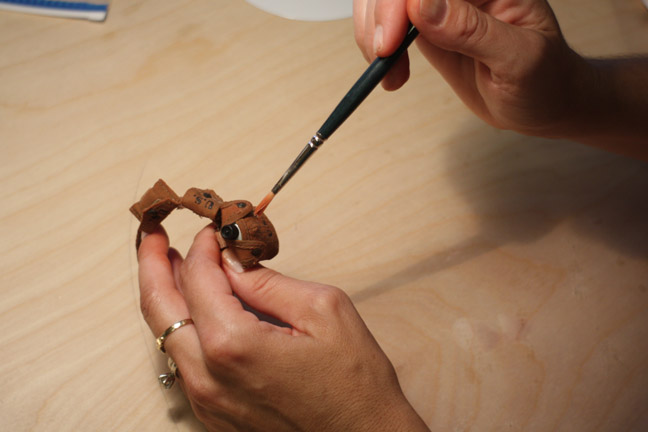 The utility belts on the original cartoon drawing were a sort of non-descript dark grey-brown. The utility belts that the soldier uniforms came with were very, very light tan. They were also made of polyester, which would not take a dye very well. So Brandi just mixed up some brownish acrylic wash and painted it on. Worked great and gave us a nice, leather like finish. I don't think the Army ever had uniforms or utility belts like this but, hey, this is what's in the cartoon so that's kind of what we have to follow.

On a similar note, the uniforms in the cartoon were tucked into the pants and boots and were all a monotone olive drab color when, in reality, most of the uniforms  had a lighter top and darker bottom. Brandi managed to find the appropriate uniforms online that matched the cartoon version, which meant that neither of us would have to sew anything (whew!). 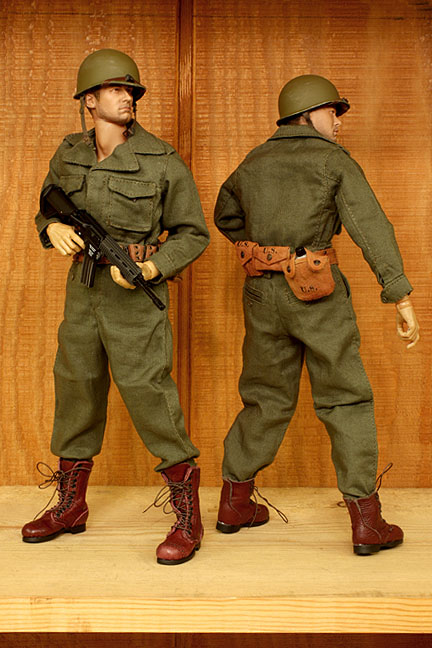 This is what the best dressed soldier is wearing these days:
(I just hope they don't trip over their boot laces!) 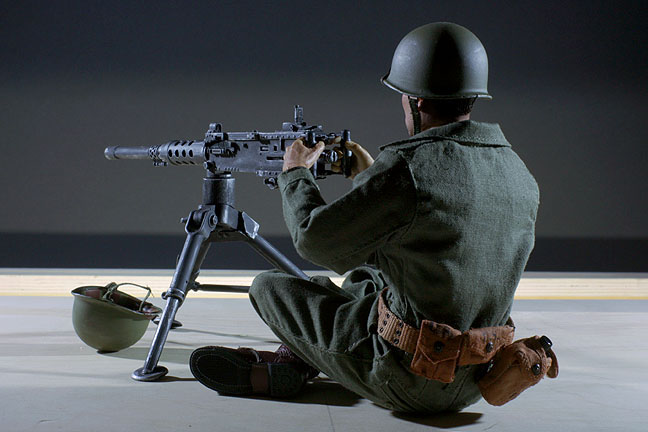 Nothing spectacular. Just a quick night time lighting test on the new stage. I found some nifty compact flourescent (did I spell that right?) lamps with the smaller base that match my el-cheapo movie lights.  They say they are tungsten balanced at 3200 degrees but are actually a tad on the blue side IMHO, which works fine for night time shots! For any daylight shots, I'll need to add some full CT color correction gel but, otherwise, I think they work just great. No heat, either! :)

After the obligatory painting of the stage in flat black, we went to work on the machine gun nest set. Here you see Brandi hot melt gluing the sandbags into place. I found that I had to remove the feet of the soldiers to get them into a position that more closely matched the cartoon version. Fortunately, you don't really see their feet in the shot so it didn't matter. I also made a depression for their legs to go into which helped raise the machine gun to more eye level, in keeping with the cartoon drawing. 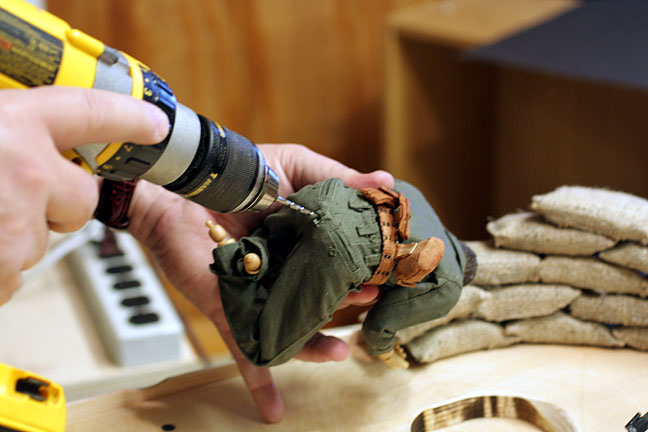 Don't ask, don't tell, okay?
Look, I needed a way to attach the soldiers firmly to the set and this seemed like the most practical way to achieve that goal.
I don't want to hear about it in emails. So just move on. There's nothing to see here. 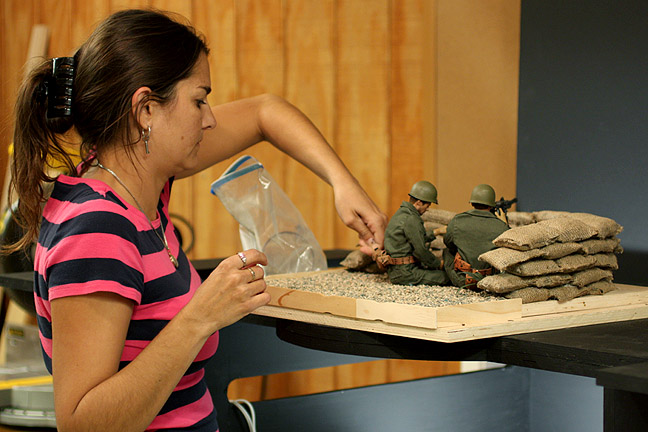 Here Brandi is adding kitty litter to the set to simulate a rocky terrain. This will be augmented with larger, real rocks as well. 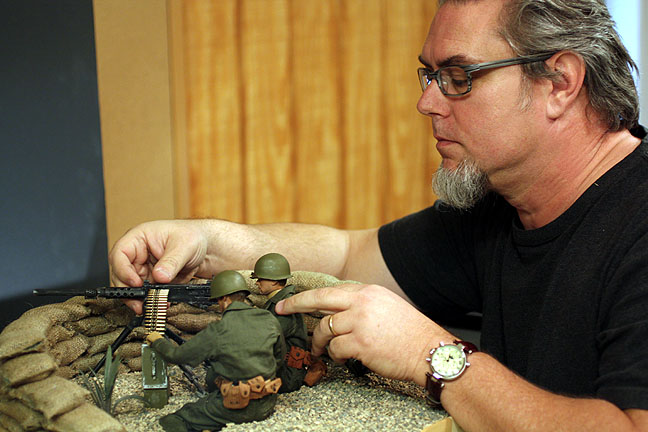 Yours truly making some final adjustments to the machine gun and soldiers.
The larger rocks have not yet been added. 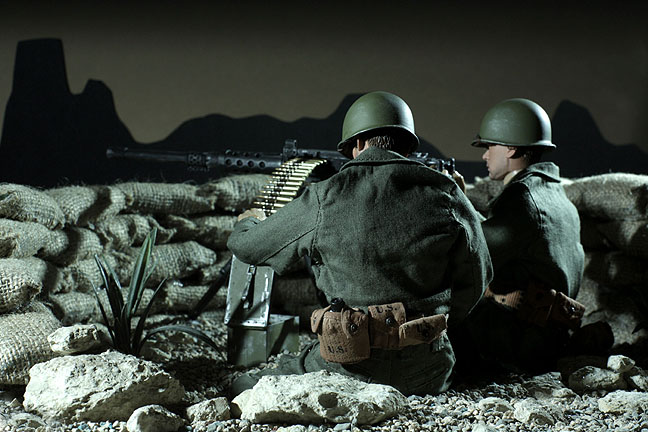 Two different views of the set during a lighting test. This one was shot with a 50mm lens. I like it but feel it is a bit too compressed and depth of field is problematic as the lens only stops down to f16. 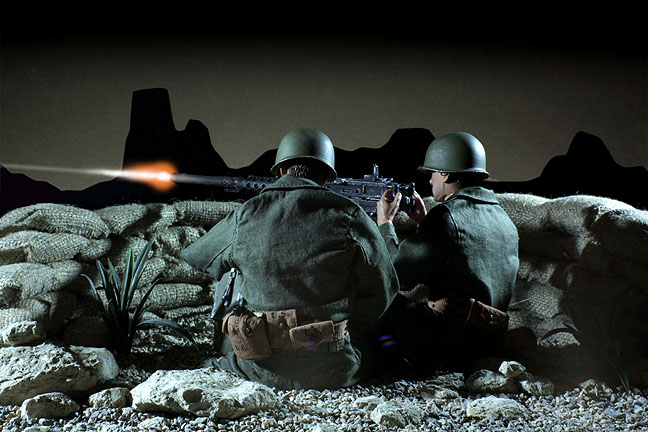 This was shot with my favored 35mm lens, which gives a nice bit of depth and stops down to f22. Still, I kind of like the softer mountains in the background of the 50mm. Hmmm.....I'll have to think about it a bit. Anyway, decided to add some gun fire to this in Photoshop, just to liven it up a bit. In the actual animation, there will be interactive lighting on the set and soldiers when the muzzle flash appears on each frame. 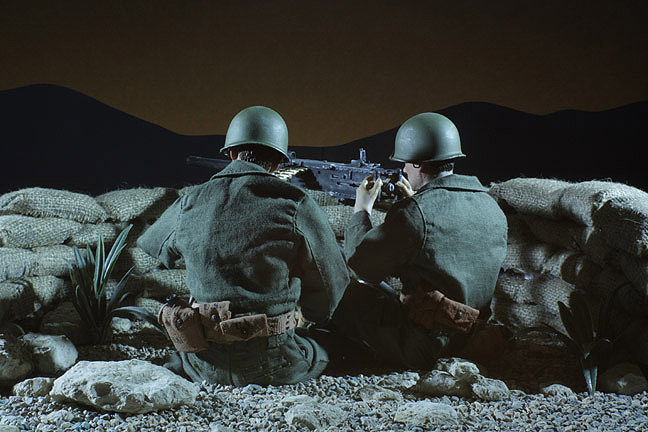 In the mean time, did some final lighting tests. I added some orange gel to the horizon light which not only added some warm color to the sky, but subdued the horizon. I also simplifed the shape of the hills in the background so as not to call attention to them. I found the previous horizon too distracting in a Bugs Bunny/Road Runner kind of way. As mentioned before, this shot will have a slight rotation to it, even though it only lasts 33 frames! 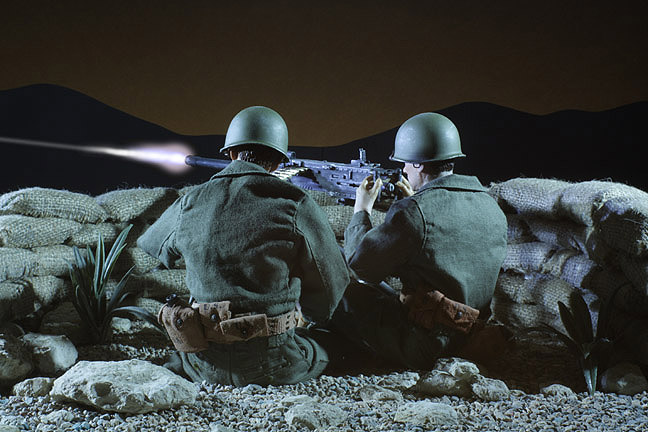 This is the same position but with interactive lighting from an LED penlight aimed at the gun and soldier. I dropped the reddish glow from the barrel and decided to go with something that was more white hot, which ties in with the lighting in their faces and on the sandbags.

Finally! Spent the day animating the machine gun nest. Here's a shot of the set up. 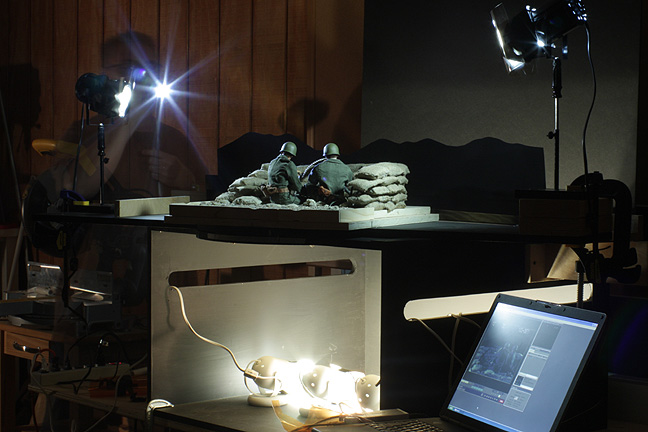 That's me in the back, pointing a really bright LED penlight for each frame that requires
a muzzle flash. The penlight illuminates the faces and sandbags only on those frames.
In the foreground, you can see my laptop which takes a feed from the video out
of the digital still camera for reference. 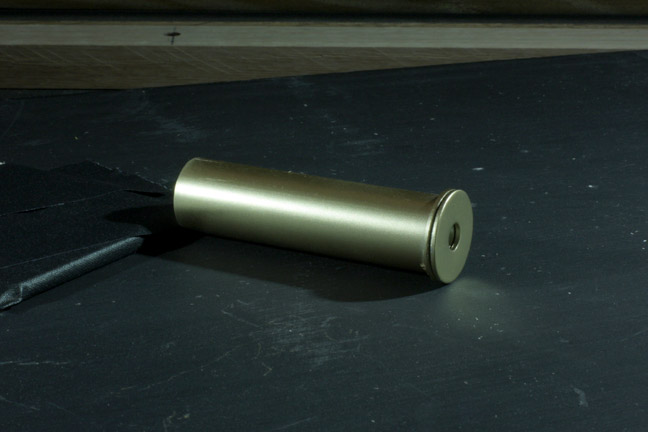 After completion of the shot, I then needed to construct a single shell casing
to be animated ejecting from the machine gun. I just grabbed a piece of PVC
and then hot melt glued a couple of washers I had hanging around. A quick
coat of gold spray paint and, voila! A 50 calibre shell ! 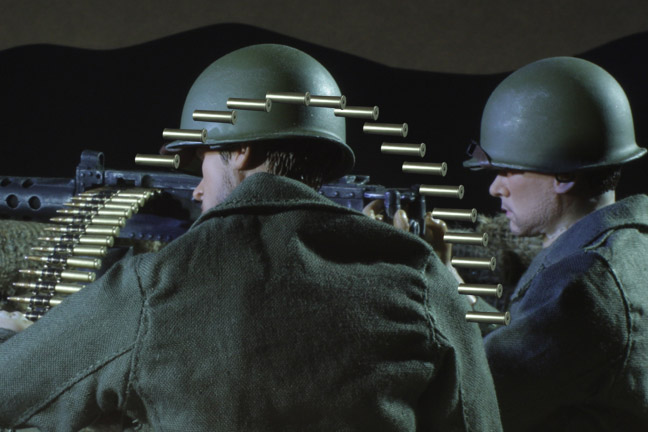 I then took the photo of the shell casing into Photoshop where I matched
the size and color of the original casings on the model. I then worked
out the "flight path" of the ejecting casings and devised a simple
animation cycle that repeated across three frames. Since the shot
was only 33 frames long, I just pasted them into the scene, one frame
at a time. I had to erase any areas where they passed behind
the soldiers, of course.