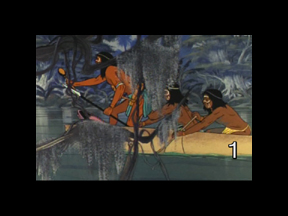 
-UPDATE-
NOTE: After looking at this completed shot cut into the rest of the sequence, I decided that it was too light and "happy". I also felt that it did not have enough atmosphere and that the natives were not reading well against the background. In short, it was too bright and busy. So I added a graduation filter over the backround and then racked the foreground and background out of focus to isolate the natives in the canoe and make them stand out more. I also added a slow zoom into to the shot to give it more depth. Click on the picture above for the new version.
To see the original version, click HERE. Also, I made some changes to the cut that followed this one.
To see those changes, click HERE.

The above drawing is a composite of several key frames in a panning shot where the scenery moves left to right and the camera tracks along with the canoe full of natives. There are actually only three natives but the panarama makes it look like there's more. 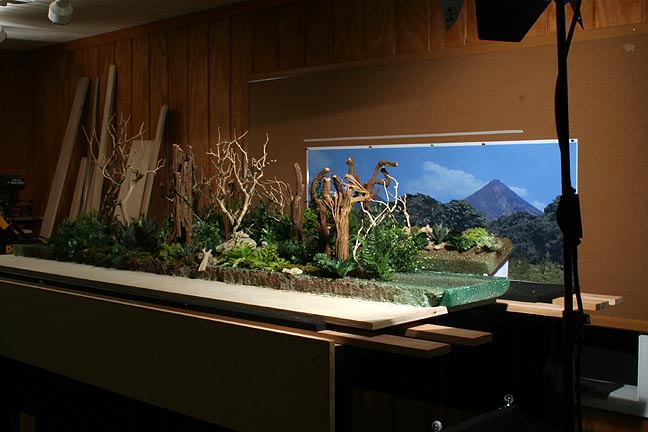 Here's the set up on the new animation table. Note the two different layers of trees, plants, etc.

I managed to combine a variety of hi-rez jungle and volcano photos into a single backdrop. Because this scenery would be at infinity, it would not appear to move, relative to the camera while the two foreground layers will move at different speeds. 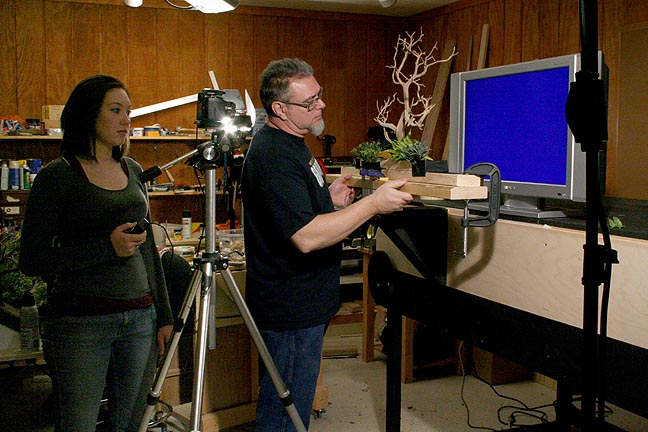 My daughter Kelsey was visiting from college and got dragooned into assisting while I animate the foreground tree and plants as they pass near the camera on a separate layer. This is necessary as I will be shooting the natives at a different scale and compositing them into the final scene. 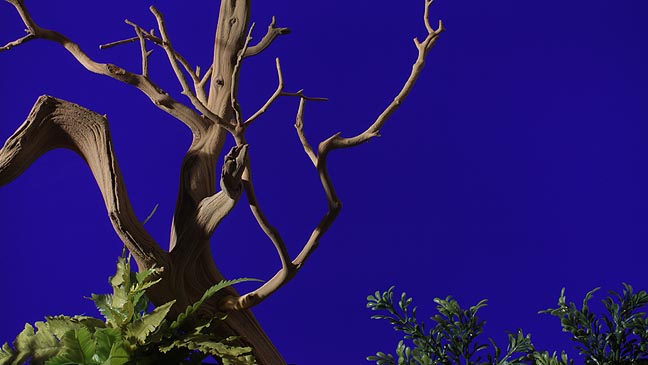 I found that an old flat screen monitor makes a great bluescreen when it has nothing plugged into one of its video inputs. Pure blue and perfectly even distribution of color. Couldn't be easier.

How to make a jungle river set in three easy steps: 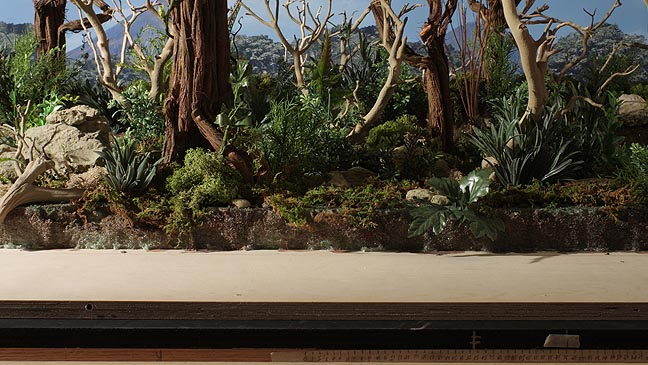 Step one: Shooting the background on a multiplane table so that you have different layers of movement at different speeds to add depth. 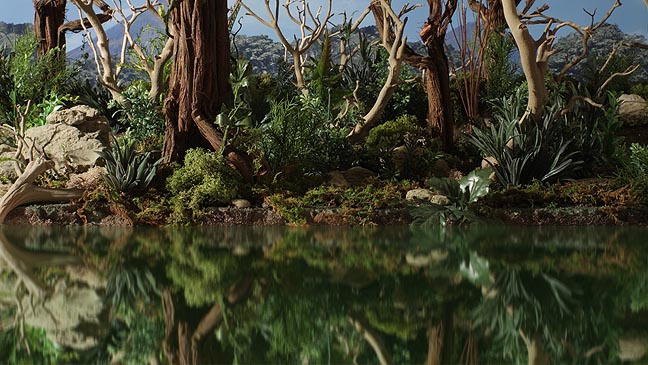 Step two: In Photoshop, flip the imagery and the apply a slight vertical motion blur and green tint to create a watery reflection.

And just to make it interesting, I created a tiny animated bird in Photoshop. 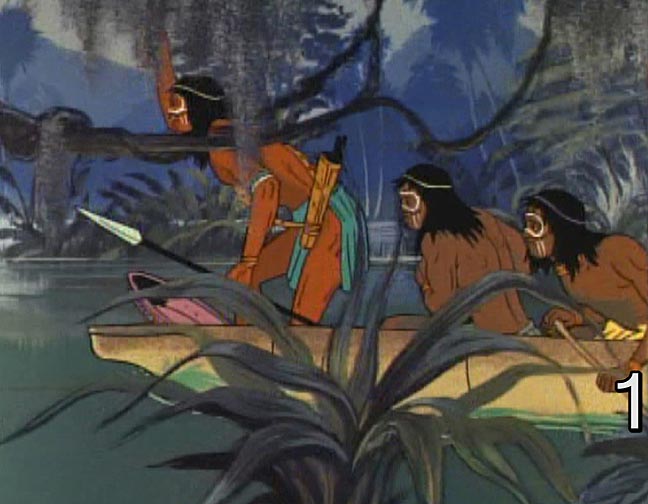 Now for the natives. Here is what the natives in the canoe for Scene 1 look like.

So to make my version of the native, I started with a standard military action figure. 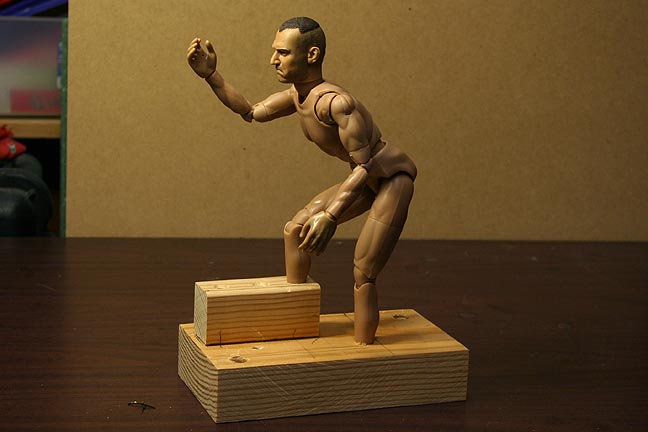 Fortunately, Brandi was able to find a soldlier that looked supremely pissed off, though his
position here adds a whole new meaning to the term "Army Grunt".

Because the feet will never be seen, I just drilled a couple of 1/2 inch holes in a block of wood for stability. 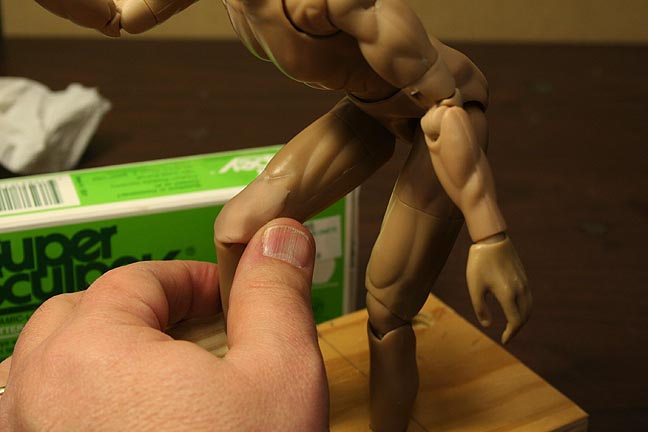 Though I could sculpt the native from scratch, this saves a bundle of time. However, I do have to use some Super Sculpey to cover the joints in the action figure. Fortunately, the Sculpey is almost the same color as the plastic figure.

Here the action figure has been completely covered except for a couple of strategic joints that will remain open. 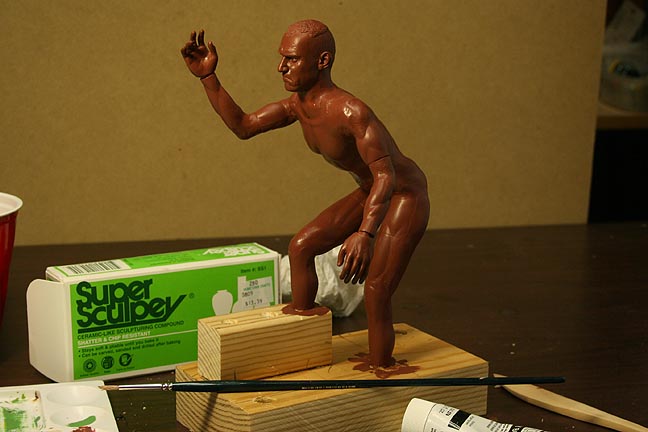 Next the figure is given a couple of coats of paint. One interesting thing about Super Sculpey is that, if you paint it before it dries, then it stays flexible because the air never gets to it. Handy. 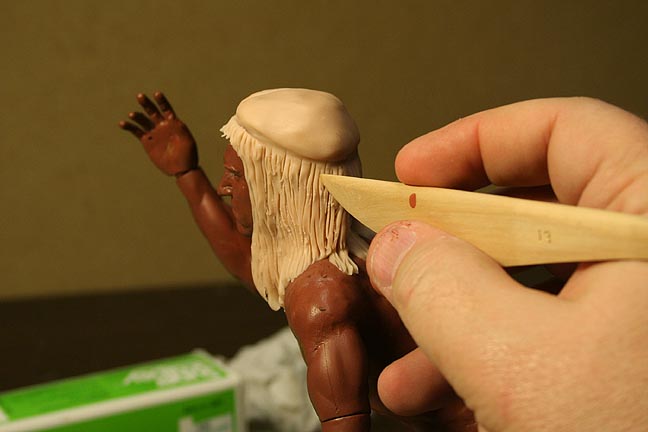 Scupley is added to his head and hair is carefully scuplted in place. Note the indention for the head band.

So, as a comparison, above is the cartoon version of the native. 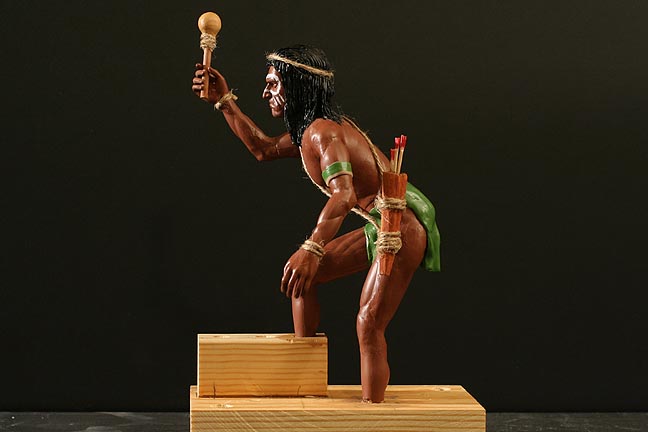 And here are a couple of views of the finished native figure.
Brandi did a bang up job on the arrow holder and arrows. 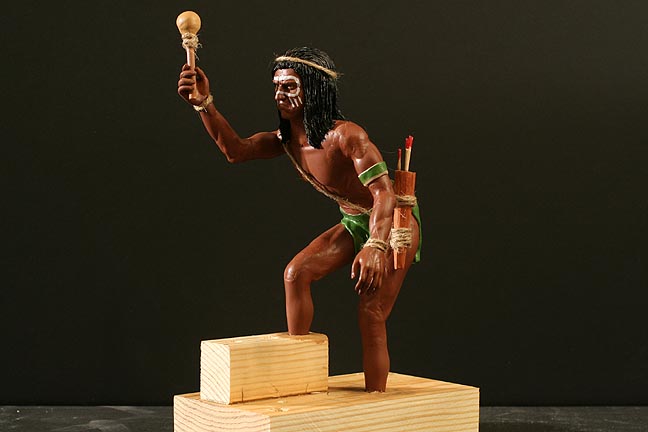 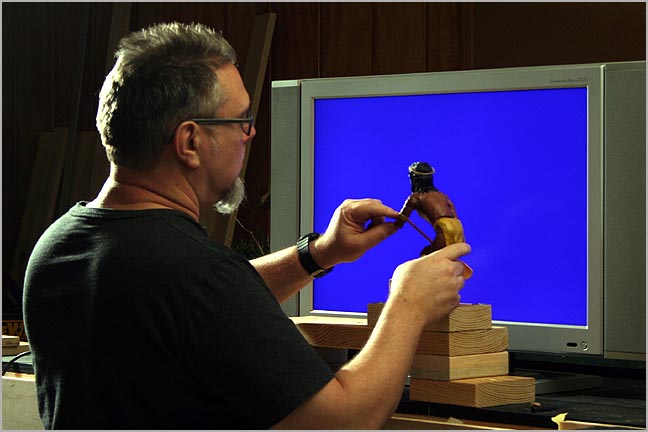 The original cartoon version had only three natives. But the wider 16:9 aspect ratio of HD called for the addition of a fourth native in the canoe. Fortunately, I did not have to animate the native four times. Since I was shooting against a bluescreen, I could simply reposition the figure during the compositing stage in post production.

The cartoon had a sort of funky, square, flat-bottom canoe but I opted for a more traditional type. The oval ends allowed for easier placement in the frame without having to worry too much about any mis-matched perspective that a square-ended canoe would have fostered.

After shooting the puppet in the standing position, I then gave it a new coat of paint to change the color of the loin cloth and to touch up the skin where the paint may have peeled.  After compositing, I then added shadows and water splashes, etc.
(Note: The green background here is just for illustration. The puppets were shot on bluescreen.) 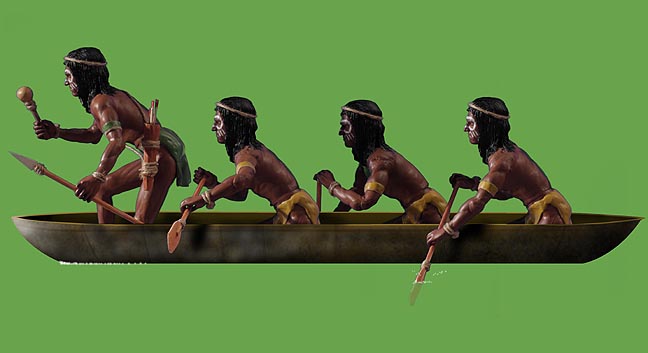 Here the natives have been composited in the canoe and are ready for a ride down the river!